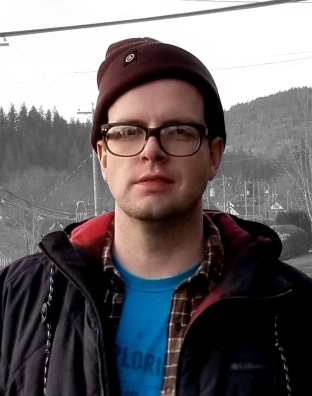 CHHR: When did you realize you wanted to be a writer?
There are three points I can recall where writing fiction seemed like a good idea.
In the eighth grade I made an illustrated book about one of my classmates and sold it for five bucks a pop. I made on the photocopier where my mother worked overnight once a week as the janitor. It was stupid as shit, but funny.
In the ninth grade I was suspended for a day for writing a story on this other kid’s calculator. It was one of those super fancy deals, something like a tablet before that was possible. He must’ve stolen it, can’t imagine how else he’d have it. It was about Swank Master D and his sexual misadventures with the pervert Mr. J. My art teach Mr. James took the calculator (a known pervert—coached girls’ volleyball, field hockey, and rugby) and caught the parallels between himself and the character in Swank Master D’s adventure. My buddy got suspended for a week because he wouldn’t say who wrote the thing. I got suspended because I was there and always got suspended, probably they were sure I had something to do with it.
Third time was while I was driving across the Canadian prairies and I got an idea about a waiting room for souls recently departed from Earth where they’d complain about all the garbage the bodies they wore did. It became a novel, probably nobody will ever see it.

CHHR: What does your writing schedule look like?
I get out of bed, I check my email, and then I write about a thousand words. I used to write much more, but I’m not Stephen King or James Patterson, it’s hard enough to find an audience for like fifty thousand words, I mean you can write a million words a year and unless you’re famous, nobody cares. So I now write just a thousand (unless I’m getting right down on a ton of my edits), then I get to other work for about seven hours, then I edit something for a couple hours a night. I stick to this pretty much seven days a week, but take a shortened Friday, usually.
It seems once a year—at minimum—I’ll force a novel out of myself, so for a month I’ll write three to six thousand words a day. Getting a good stockpile from this now.
CHHR: Do you have any interesting writing rituals? If so, what are they?
The only semi-ritual thing might be a bit of superstition, I don’t like talking about an idea unless I’m trying not to write it. If I say something aloud—to someone—it usually absolves me of writing it.
CHHR: Do you like writing short stories or novels?
Both. My brain forces a lot of novelettes on me. Like eight to fifteen thousand words. Can’t really even submit those anywhere, but eventually I can collect the good ones and pack them off, hope for the best with a publisher. Worked the only time I’ve tried it so far, so… maybe they’re okay.
CHHR: How is the horror scene where you live?
Notta. Generally, the only time anything resembling horror becomes anything more than nothing is Halloween. It’s okay though, too much socializing is detrimental to work.
CHHR: Do you use outlines or do you go with the flow?
I haven’t outlined since my second novel, and I threw that windy fuck pile in the trash. I get an idea about a character usually and go with it until it concludes or it runs out of steam.
CHHR: How did publishing your first book or short story change your writing process?
It didn’t, really. For those first few hundred thousand words, I didn’t know how trash I was at writing. Now, I try to get better at different aspects where maybe I’m failing. I also try new things and challenge myself. Anybody can write fifty, one hundred, five hundred stories, but if you’re not bettering yourself and challenging yourself, what’s the point?
CHHR: What do you think makes a good horror story?
Characters are first and foremost. Knowing the difference between writing scary scenes and describing supposedly scary things. Originality. An ending that isn’t entirely predictable. Reaching beyond the initial thoughts with a finale, asking is this good enough? is a fine way to see that often it isn’t enough.
CHHR: What are you currently working on?
Writing some damned novelette. Editing two novels. Looking for homes for dozens of shorts, a couple novellas, and a couple other novels. Testing out query letters. Trying to keep from banging my head on things. Man, bludgeoning oneself is incredibly tempting pretty much all day every day. 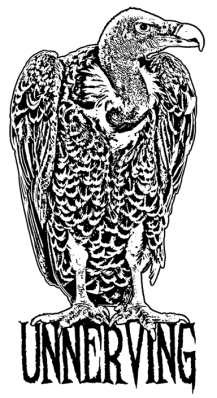 CHHR: When and why did you start Unnerving Magazine?
I figured I could because I knew enough about the indie horror scene and I thought I might meet some cool people. People like it, so I’ll keep doing it until people stop.
CHHR: What have you learned since starting the publication?
A ton about people and their motivations, or just as often, lack of motivation beyond chatter. Much of what I would’ve learned, had I not been floating around horror for years beforehand, I’d already picked up through a continual existence of failures.
CHHR: Can you tell us a little bit about the upcoming catalogue?
It’s all over the horror spectrum, from weird to thriller to crime to schlock to literary. It’s stuff I liked. I have one more title to announce; a novelette. Overall, I’m very happy with what’s coming up. The hardcovers are a new challenge that have added a new stress level, so that’s fun.
It’s much bigger than last year and it’s about as much as I can do without having to seek outside help, which I don’t want to do. So anyone reading this wondering when they can send over their sub for standalone consideration, take it elsewhere.
CHHR: What is in your TBR pile?
About a dozen requests from authors that come and go.
Now, if you mean what I wish I could read… I’d finish reading the Stephen King stories, I’d tackle the rest of Stephen Graham Jones’ catalog, same with Megan Abbott, I have a bunch of cheesy paperbacks from the eighties I’d like to read someday. For the sake of completion, I have like four or five Atwood novels I haven’t read, same with Clive Barker. I’ve never read a Kathe Koja novel, be cool to do that.
Oh! I just ordered the first two Hap and Leonard books by Joe Lansdale, as well as Michelle McNamara’s book. I’m going to read those in short order after they arrive.
Eventually, I’ll probably stop doing so many reviews and only pre-read for interviews, then I’ll go back to reading without thinking about who I promised or who I want to make happy, et cetera.

CHHR: What is the last book that scared you?
The Shining but that’s cheating because it was a reread. Probably Bone White, maybe Mapping the Interior. Been a slow-ish year so far with scares.
CHHR: What is your favorite horror film?
The Shining. I watch it like five times a year.
CHHR: What is your spirit animal?
Barn cat. I’m definitely like a barn cat in a lot of ways.
CHHR: What is your favorite beer?
Drinkers are stinkers… I used to drink tequila, mostly, or Crown Reserve rye. I never learned to burp, so beer was always difficult to enjoy—still drank it more than was smart.
CHHR: If you could have a beer with one author, who would it be?
I guess I’d sip a Diet Coke with Stephen King, but I guess he’d drink Pepsi like a savage. Then again, maybe I’ve idolized him to a spot he can’t possibly live up to.
I had a dream once that I saw Stephen King on the street and we made eye contact, he mouthed something and then scurried off because another annoying fan was about to harass him.
So yeah, maybe I’d rather not meet him, it’s shitty to be a bother.

Author Bio:
Eddie Generous is a coauthor of the slasher collection Splish, Slash, Takin’ a Bloodbath (written with Mark Allan Gunnells and Renee Miller) as well as of Dead is Dead, but Not Always (available this spring from Hellbound Books), he runs Unnerving and Unnerving Magazine, and he lives on the Pacific Coast of British Columbia with his wife and their cat overlords.
www.unnervingmagazine.com
@UnnervingMagazine – Facebook (https://www.facebook.com/UnnervingMagazine/)
@UnnervingMag – Twitter (https://twitter.com/UnnervingMag)
www.jiffypopandhorror.com
@GenerousEd – Twitter (https://twitter.com/GenerousEd)